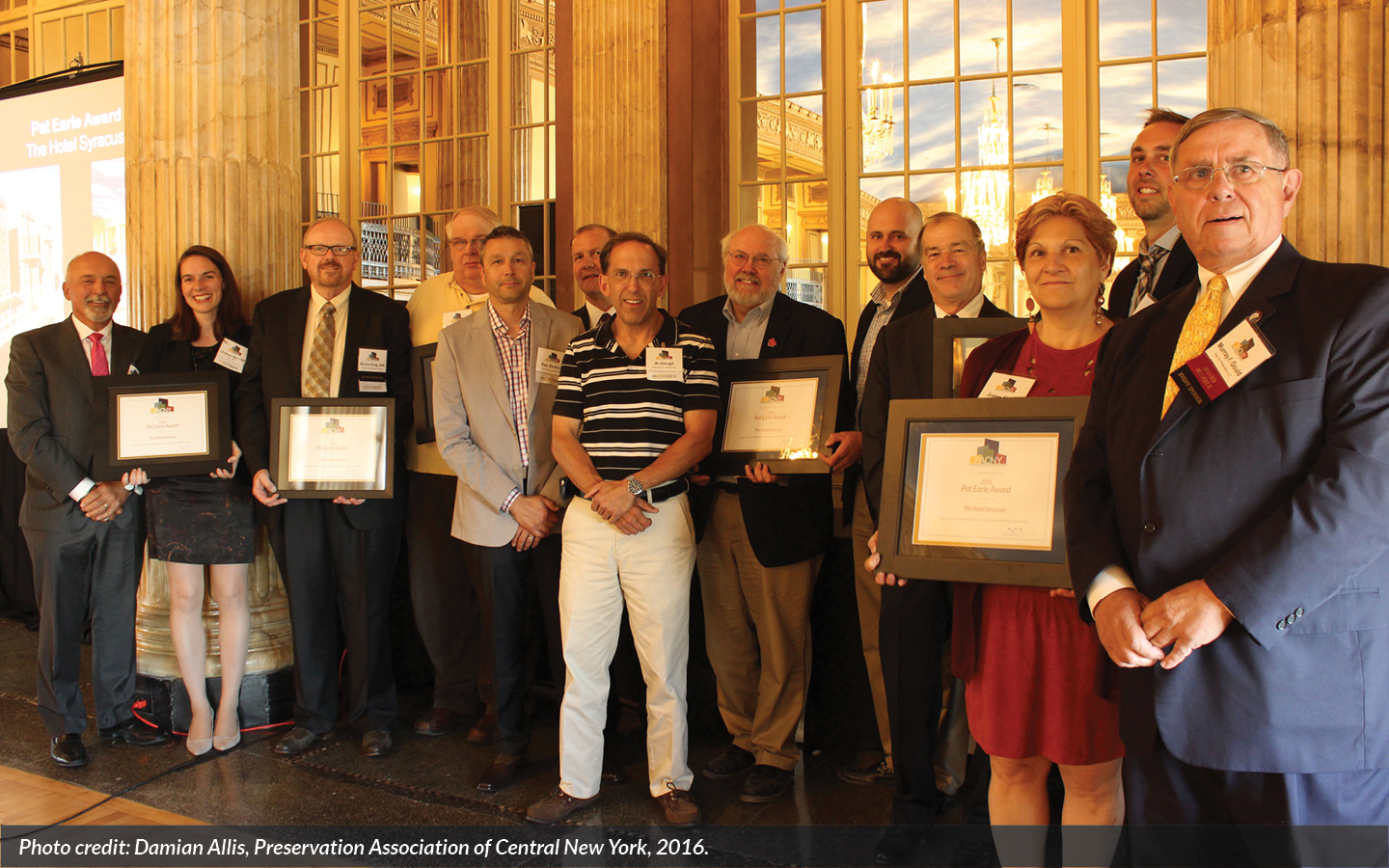 The Preservation Association of Central New York recently honored EDR with the 2016 Pat Earle Award for our role in the restoration of the venerable Marriott Syracuse Downtown (the former Hotel Syracuse).  This prestigious award is bestowed on projects that rise to the level of “a singular outstanding historic preservation project that benefits the community”. EDR Principal Joanne Stewart was proud and pleased to accept this award on behalf of the firm alongside the other honorees: Ed Riley, Keven Riley, Al Gough, Wade Fischer and Dan Sedlock (representing the Hotel Syracuse Restoration Project); Allen Naples and Lindsay Weichert (representing M&T Bank); Gary Thurston (representing the Hayner Hoyt Corporation); Bruce King and Jamie Williams (representing Holmes King Kallquist Architects);  Al Daniels and Sam Cosamano (representing IPD Engineering); and, Bill Thresh (representing E.F. Thresh, Inc.).
According to PACNY, “The history of the Hotel (opened August.1924) is fascinating.  It was the go-to place for wedding receptions, graduations, proms and other significant events.  Whether the Persian Terrace or this beautiful ballroom, this was the pre-eminent event location in Central New York.  What does this new Hotel mean to our community?  This is really an economic engine for the downtown and the region.  With its proximity to the Convention Center, a five-star elegant hotel will significantly boost economic activity.  With more than 230 deluxe guest rooms, the community we can now support a greatly expanded level of convention business. More shoppers and people eating at our great restaurants will be the direct result of the Hotel.  Not to be overlooked are the many jobs created at the Hotel and supporting businesses. This is by far the region’s most significant historic rehabilitation project!”
According to Patrick Heaton, an EDR Principal and member of the PACNY Board of Directors, “EDR is grateful to PACNY for honoring our involvement in such an iconic project, and proud to have been one of the sponsors of this momentous event.”